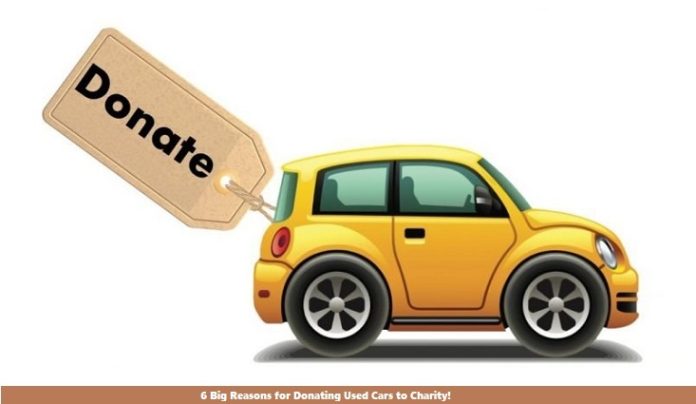 Are you considering donating used cars to charity? Do you know how you can maximize the benefits associated with it? In fact, in no time this became the favorite way of people in the United States to get rid of their used cars. And, why wouldn’t people do that? It’s not only a social purpose but is also a relief for you.  And yes, a charitable cause lowers your tax burden too. So there are multiple benefits associated with it. Of course, you can maximize your benefits but the little benefit is way better than no benefit at all.

There are certain experiences that state that the situation is not always fruitful. Especially, if you neglect some important aspects of charity. There are pros and cons but with the right mindset and complete information, you won’t have to worry about the cons.

If we talk about 2004 then donating a car seemed like a tax gambit to people. There were numerous instances where people would take tax deductions of thousands of dollars while the car didn’t end up at charity for all of them. Congress did put a hold on it through the American Jobs Creation Act. This act states that you cannot avail of the benefits of a tax deduction of more than 500$ for donating a car or any other vehicle. It’s true that cars often self for merely 50$ at charity sales or auctions. And according to the act, the exact amount the car garners for the charity was used for calculation of tax deduction. So it was obvious for people to lose interest in it.

Here, we will give you the various reasons why you must consider donating used cars to charity:

#1: Helping a Charity Is a Step Towards Humanity

Yes, we are talking about humanity. Do you really pay attention to people who are in extreme need of funds? Don’t you think that your small contribution can make a big difference in their life? Look around and find a charity whose work you trust. Maybe you are already supporting one and that’s great. So help that charity by donating a used car.

#2: A Charity Definitely Needs a Vehicle

If you are planning to donate a used car, the charities are smart enough to make good use of it. They have tons of work to do. For example, delivering meals to children and elderly people, taking people to doctors, finding people who need them, and many more. The charity mission is not an easy task. It requires continuous efforts by people. In the United States, Goodwill, Salvation Army, and United Way are some of the best charities. A used car is definitely a great help for them.

#3: Save Yourself from Car Selling Hassle

Yes, these days selling a used car is not easy. With automobile companies launching new and affordable models, people are more and more attracted to buying a new car. You cannot just ask your friends to please ask people in their circle if they need a car. First, you have to pay for an ad in the newspaper. So you start spending money the day you plan on selling it.

You keep on paying for it and people call, message, or email you regarding your query. You have to reply to each one of them and still, there is no guarantee that your car will sell at a good price. It’s a hassle and donating it can save you from this.

Earlier, we told you about an act that is active since 2004 and you might feel that there are no benefits of this charity. That’s not the case. There are multiple ways for it. For example, you plan on donating a car whose value is more than $500. Now, once the charity sells it, you must get hold of a written statement that clearly states it. Similarly, if the charity itself uses the car then a written certification proves it. This will help you with the tax deduction process and you can still file for a fair market value deduction. There are a few forms that you need to attach like IRS Form 8283 for more information. For more money, you can do this much.

Yes, you can take the benefit of a free pick-up service too. There are multiple charities out there that provide this service. You must consult the charity about it. They will tow the car from your house or garage free of cost. Even if they charge you for this service, you can add it with the total amount and use it in a tax deduction. So all in all the benefits are only yours. In case, you want to be more generous then drive on your own or ask your friend or relative to do it.

If your car is not in a state that you can drive it or even the charities can’t use it, still it qualifies for a charity. The scrap is again of some use. Charities can sell its useful parts and raise money. This will remove the headache of repairing it for use.

We understand that everyone is not behind tax deduction or benefits with charity work. They don’t even bother to look into the matter and simply donate it. Still, its important for you to keep a check on charities. There are scams that state that cars were not used for charity work. Some people even suggest selling the car on their own and then donating the money. That’s totally up to you. It depends on your awareness of the charity work and the organization you are planning to work for. In any way, charity is definitely a great thing to do. You can even donate your trucks, boat, or other vehicles.

In case, you want to know more about it or still have doubts about donating used cars to charity then contact us. We will try to answer your question on this topic as soon as possible.

How Do I Donate A Car Without A Title? [Complete Guide]

4 Pros And Cons Of Donating A Car To A Charity!

Tax Deduction On Donating a Car – Everything You Ought To Know

What is better: Donate or sell a car? [Complete Guide]

Can you donate a car with expired registration?

Does Car Finance affect your Credit?

Reasons Why Businesses Should Invest In Customized Cardboard Boxes

What is Retail Finance and How Does It Work for Businesses?

ABOUT US
Welcome to our blog to read latest article related to health, wealth, Insurance, Attorney, loan & digital marketing. Subscribe or bookmark our blog to get latest updates
FOLLOW US
© Copyright 2022